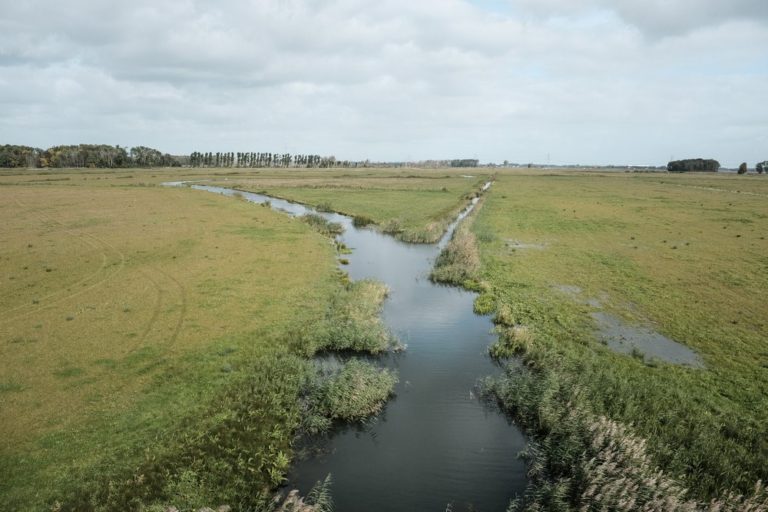 Flood Resilience In The Netherlands

I was recently given the opportunity to get a firsthand look at flood control and stormwater management projects in the Netherlands with representatives from the Charleston and Baton Rouge areas. The trip was a wide-ranging tour and briefing on various projects the Dutch have implemented to protect their population from riverine, rainfall, and coastal flooding in both urban and rural environments. It seems that the Dutch monitor and control every drop of water that falls within their borders, and they do it out of necessity. Only approximately 50% of the Netherlands is higher than 1 meter above sea level, with approximately 30% being below sea level (the lowest areas are over 20’ below sea level). They have been pumping and managing water for centuries, and some of these practices have caused their lands comprised of peat to subside. Ensuring that these areas remain wet is essential to preventing further subsidence. Polders, or low areas protected by dikes, canals, and pumping stations, make up a large portion of the Dutch landscape. Without these water management practices, approximately half of the Netherlands could be uninhabitable.

We were based out of Amsterdam for the week, but the itinerary included trips to Nijmegen, Delft, Rotterdam, the Noordwaard Polder Project, and the Bovenkerkerpolder. We also visited Deltares, “an independent institute for applied research in the field of water and subsurface” in Delft, to learn more about their research and projects across the world and to celebrate their 10-year anniversary. The overall goal of the trip was to study Dutch solutions to water management and bring ideas and inspiration back on how to make Charleston more resilient to sea level rise, storm surge, and rainfall flooding.

The ‘Room for the River’ Program was a transition in river management policy for the Dutch, and it resulted from the 1996 Flood Protection Law (Water Law). Two explicit goals of the ‘Room for the River’ Projects were to prevent further dike heightening by making room for out-of-bank flooding and to enhance the natural and cultural landscape values (spatial quality). The Waal ‘Room for the River’ Project in Nijmegen consisted of demolishing and relocating approximately 50 homes in the village of Lent to make room for an overflow/diversion channel to mitigate against flood levels in the Waal River. The town of Nijmegen and the village of Lent are located on opposite sides of the Waal at a narrow oxbow that increased the risk of the river overflowing its banks. Floods in 1993 and 1995 showed the need for mitigation practices to protect residents against flooding. The project helps to alleviate this risk, and it also serves as a public amenity with bike bridges and a waterside amphitheater. From planning to implementation, the project only took 15 years to complete. It was delivered under budget and ahead of schedule. Since its completion, it has allowed the residents of Lent and Nijmegen to reconnect to the river and its water, an activity that used to be too dangerous due to the river’s configuration and boat traffic. The project is one of 34 projects that were designed and constructed as part of the Netherlands ‘Room for the River’ Program.

The Water Boards of the Netherlands are decentralized governmental agencies with legal responsibilities and taxation authority. The Water Board Hoogheemraadschap De Stichtse Rijnlanden (HDSR), located in Houten, is one of 25 regional water authorities throughout the Netherlands. Their mission is “Safe Dikes, Dry Feet, Clean Water”, and their tasks include flood control, surface water quantity, and surface water quality (including wastewater treatment). They have a chairman, who is appointed by the King, and commissioners, who are elected to 4-year terms. Per our hosts, the Water Boards are one of the oldest democracies in the world dating back to 1222. The HDSR manages 60 km of river dykes, 330 km of secondary dikes, 1,300 km of principal waterways, 8,000 km of smaller waterways, and 17 sewage treatment plants. They employ 400 people and serve a population of 755,000. Their income is generated through water system taxes, sewage treatment taxes, and a water pollution levy.

Delatres is a planning and research institution focusing on flood risk, adaptive delta planning, infrastructure, water & subsoil resources, and the environment. Their work spans the globe, and they provide real-time reservoir management for Bonneville Poser Administration, Tennessee Valley Authority, and Idaho Power in the US. They also developed a forecasting and warning system for main rivers in the US used by the Nation Weather Service.

They have developed a lot of different tools for planners, engineers, and the public to use to simulate different water management applications in urban and rural settings. At their Delft location, we toured a half-scale water flume used to investigate various parameters including energy dissipating shoreline plantings. They also have a water lab that includes several smaller scale models. At the time of our visit, they were modeling the interaction between the sweet water (fresh water) and the salt water for an expansion of a port facility in Rotterdam. Overall, Deltares employees over 800 people from 28 nationalities.

The Noordwaard Polder Project is another ‘Room for the River’ Project. It is a collection of unique wetlands with 34 bridges for recreation and 16 pumps and 26 small windmills for drainage. The project involved moving over 4,000,000 cubic-meters of earthwork to allow for the Nieuwe Merwede River to overflow its banks into the area to protect downstream areas. Several dikes were lowered to allow the flooding of land, and a main flow channel was constructed to carry the flood waters out to the sea. One innovative, nature-based solution implemented in the Noordwaard Poulder Project was the construction of a ‘griend’ – or strand of willows – to dissipate wave energy and allow for smaller dikes to be constructed. Overall, the project was constructed within 5 years and provides unique nature interaction, recreation activities, and economic activities.

Rotterdam is somewhat of an urban lab with innovative experiments on urban resilience and flood mitigation projects. Rotterdam has a population of 600,000 and is Europe’s largest port. It experiences roughly two floods per year and is subject to an increase in ‘nuisance’ flooding. The outer dikes of Rotterdam are the highest areas, and some areas are up to 7 meters below sea level. Their drainage system is at capacity, so they have implemented a wide array of urban stormwater management facilities. They are changing their ways to use nature-based solutions to live with water. Their flood mitigation strategies are driven by data – measuring and monitoring. They have developed high resolution models and have detailed information on vital and vulnerable functions. 55 millimeters (2.17 inches) per year is considered extreme rainfall in Rotterdam.

The ZoHo District has been labeled a ‘climate proof test district’. Streets have been reconstructed with water storage under and within the pavements. Permeable pavements have been implemented and proven beneficial, even in areas with a high water table. Water squares have been constructed that serve dual purposes – recreation and flood storage. A retail building has been built into ‘levees’ with a green roof on top. All of these features were designed by stakeholders in the community. These projects, combined with Rotterdam’s overall resilience strategies, have resulted in increased ‘green tourism’ for the City.

Maeslantkering is a barrier constructed to protect Rotterdam from surges from the North Sea. The gates are crescent-shaped hollow structures that float on the water. When they are closed, they fill with water and sink to the river floor. In total, it takes up to 8 hours to prepare the gates to be closed and 2.5 hours to actually close the gates. The barrier has been described as the size of two Eiffel Towers laid on their sides.

Katwijk, a coastal resort town located on the North Sea, was identified as a ‘weak link’ in the Netherlands coastal defense. A project was initiated to study practices to reinforce the shoreline at Katwijk in 2009. An elevated dune was selected as a potential solution. The local community opposed the solution as it would block views of the beach/sea from the residents and businesses. An integrated design solution was identified and implemented that considered the community concerns and improved the coastal defense infrastructure. Ultimately, the dune system was widened and 660 space parking garage and dyke built below the dunes. Most impressively, the project was constructed in approximately a year.

Areas south of Amsterdam are very low and subject to subsidence. Some of the areas have been lowered by the excavation of the peat material for energy production. The Amstel River actually flows higher than much of the surrounding lands. The Bovenkerker Polder is an ‘emergency polder’ that has been designed to function as farmland most of the time. During the potential for flood events, the livestock and residents with the polder can be evacuated to allow for the polder to store floodwaters and prevent flooding of more developed/populated areas.

Amsterdam Rainproof is “a platform that activates and stimulates different stakeholders to create a more resilient city for dealing with extreme rainfall.” Like Rotterdam, Amsterdam’s underground storm drainage infrastructure cannot handle the increased stormwater runoff volumes, so they have implemented the program to look into ways of storing and retaining stormwater in urban settings. Essentially, the goal of the program is to make the city into a sponge, absorbing rainfall before it floods urban areas. The program is a result of the city observing significant flooding from heavy rains in Copenhagen. At the core of Rainproof’s mission is public engagement. Their strategy seeks to build “an influential, broad, sustainable” platform for the Amsterdam community.